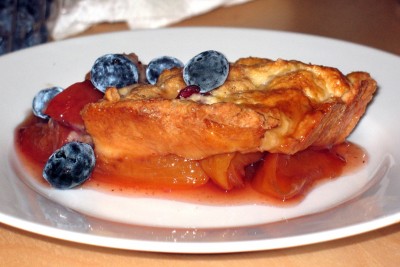 You’ve got, what, another 4 - 6 weeks before peach season ends? I would strongly advise getting on this peach cobbler recipe ASAP.

Normally I don’t like to make cobblers - or the related slumps, Betties, or Crumbles - because they’re not that satisfying from a cooking perspective. They taste good, but the presentation is lacking and there isn’t always a distinct separation of flavors or textures; it feels as if everything is put in one bowl, and you don’t get to experience different textures and flavors independently.

So I was skeptical of this recipe at the beginning, but I was making another five-course meal at the time and had to choose something simple for the dessert. Well, this cobbler has converted me - I am about to explain the various parts of the recipe and why they work so well together, but it tastes great, looks reasonably fancy, and there’s real complexity in the flavors and textures.

Basically, a bunch of peaches are cut into slices and put in a bowl. You then dress the peaches thoroughly with a mixture of brown sugar, white sugar, nutmeg, and almond liqueur (I used almond extract with no problems). This does a couple of things.

On top of the peaches, you lay what is essentially a biscuit dough. It’s almost exactly the same stuff that you’d make Southern biscuits out of, but it gets a little crunchy in the oven and its crunch and savoriness goes really well with the peaches and syrup combination. Another way to describe it might be as a fresh biscuit sandwich, with peaches and syrup in the middle.

I had some blueberries on hand, so I put them on top, which actually worked well. I would also suggest adding some freshly-whipped cream; I did this the next night and it was excellent.