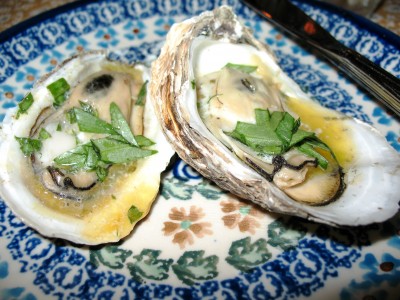 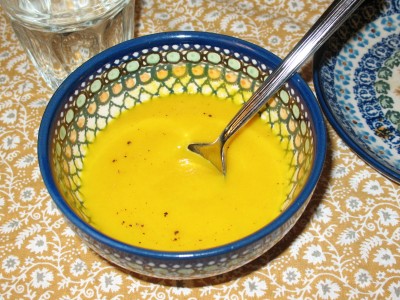 As part of this meal, I made a few other courses. Two of those other courses were a simple oyster course (oysters in a sauce of tarragon and butter), and a pepper soup that I’ve made a number of times.

This was an interesting meal because we could only cook a very limited amount of it at the house of the friends we were cooking for. As a result, we had to figure out how to serve things that (a) we could bring up from Philadelphia, or (b) make quickly or simultaneously with several other dishes. The pepper soup fit the bill well, since I was able to put it in some mason jars and bring it up with us for serving.

Oysters, of course, also require almost no preparation. One thing they do need is shucking, which is a useful skill to have. This basically means just getting the shell open. It’s a little bit like lockpicking; you need to position the shucker exactly so that the oyster’s adductor muscle (which holds the shell closed) is cut and the shell pops open.

The recipe I used calls for reserving the liquid within the oyster shell, mixing it with butter and tarragon, then heating the oyster through on a grill with the aim of melting all the butter. The tarragon and butter add a bitter sweetness that goes well with the oyster’s saltiness. I didn’t add the hot sauce that the recipe calls for, I like the flavor of oysters, you know?