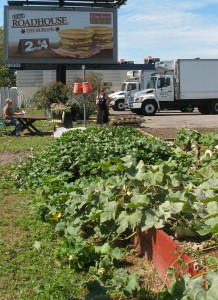 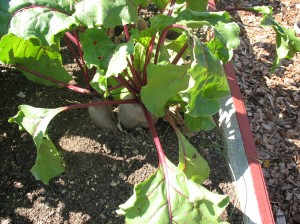 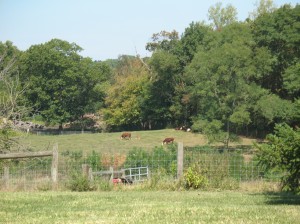 In late September, we went on the Philly Urban Farm Tour. This was a 15-mile bike ride to check out former vacant lots, parking lots and Superfund sites.

Which had all been turned into incredible, productive farms. (I’ve included a couple photos from the trip with this entry, and you can check out the full gallery here).

The first stop was Greensgrow farm in Kensington. Taking up most of a city block, and located in the middle of a residential neighborhood, they grow all sorts of stuff. Greenhouses with basil and tomatoes, a chicken coop, lots of beautiful squash and giant pumpkins. They have beehives. They have all kinds of other programs too, including green roofs, biodiesel, and a kitchen incubator. It was vaguely miraculous to see this highly productive little farm in the midst of a bunch of rowhouses.

Next, we rode to a small farm elsewhere in the city. This was actually a vacant lot that the people next door had decided to grow on. They had a cob oven and were growing small quantities of a number of crops that I can’t remember at the moment. Despite being a tiny plot of land (about the size of a house), they were apparently able to sell produce within the neighborhood, host block parties, and run a number of other small programs.

The following idea kept recurring: A farm is an immensely productive place. This is true both agriculturally, and also in the number of farming-related activities that the farmers seemed to be coordinating: community programs, food education, food banks, renewable energy, marketplaces for local crafts, lots of other things. Everything just seemed very entrepreneurial.

We went to two other places, as well. The first was a receiving and distribution warehouse for area farmers. I can’t remember everything they did, but they acted as a marketplace for area farmers, a food pantry, a receiving point for certain types of food donations, as well as a distributor to restaurants in Philadelphia and even New York! Just across their parking lot was another tiny farm. In the shadow of a giant billboard for Checkers (the burger chain), beets, peppers, kale and other vegetables were growing. I had never actually seen a beet growing right out of the ground… it’s thrilling!

That was the last truly urban farm we saw on the tour. We then made a (harrowing) five-mile bike ride, most of which was uphill, to Henry Got Crops. This is a more traditional farm just on the outskirts of Philadelphia, that was teamed up with a local school. It didn’t excite me quite as much, but it was pretty amazing to see cows less than a half-hour from Center City.