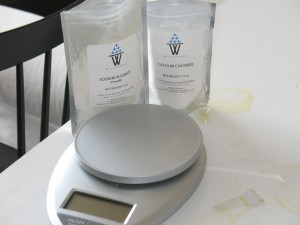 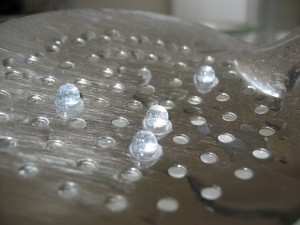 For this meal, I mentioned that I made some apple cider “caviar” to go in the soup. This is a post about how that happened.

Quite a while ago, I read this article on Instructables about how to spherify liquids. Basically, you take a fixed amount of whatever liquid you want to spherify (e.g. carrot juice), add a tiny amount of sodium alginate, which is a thickener, and then drop the liquid into a bath including calcium chloride. The outside of the liquid drops immediately form into a thin membrane.

We tried quite a few experiments with this, and we only got it to work with apple cider and water. We didn’t get it to work with: olive oil, milk (or cream), or white wine. We suspect that all of these liquids have acidity, or other properties (the fat content of cream is too high and it immediately turns into whipped cream) that interfere with the reaction. It really needs, it appears, fairly neutral liquids with no special properties. Although in researching this article, I have learned that sodium citrate can raise the pH of acidic liquids high enough for the reaction to take place; the pH needs to be above 4.

Why does this happen? Fortunately, this blogger has covered this before, and the entry is a quick read and points to the relevant scientific material: 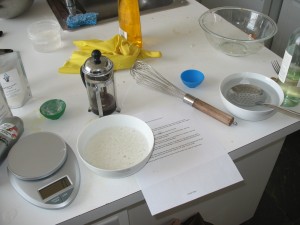 [caption id="attachment_1034" align="alignleft" width="300" caption="Full setup. The sodium alginate solution is on the left (can't remember what we were testing in this picture), the calcium chloride bath is on the right, with a skimmer for easy sphere retrieval."][/caption] 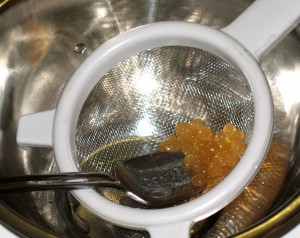 Sodium alginate has a tendency to thicken, which is why it’s used as a gelling and thickening agent. What seems to be happening, then, is that the sodium is replaced with calcium, which has a tendency to thicken even more. The mechanism for this is cross-linking between all the new molecules, and my guess (which is probably wrong) is that the outside of the ball becomes one giant polymer that keeps the liquid inside.

You know where else a reaction like this happens? When you’re seasoning a cast iron pan. The nonstick coating that eventually develops is… one giant polymer of crosslinked fatty acid molecules.