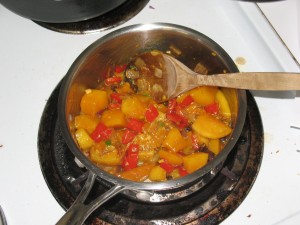 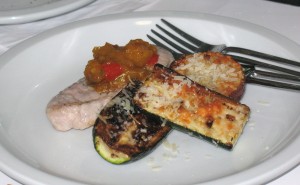 Recently I made this mango chutney, together with some pork and this recipe for broiled zucchini and potatoes.

It didn’t turn out that well. The chutney was OK, but I found that the mango flavor got pretty heavily overpowered by the raisins and peppers. In general, I find the presence of raisins in a chutney or curry distracting - they have a unique flavor and texture that really stands out, which makes it easy for them to overwhelm other flavors.

Also, parmesan doesn’t really seem to work under a broiler. Instead of melting, it seemed to char and it immediately took up a distinct and unpleasant burned / oily flavor which really detracted from the vegetables.

Anyway, I probably won’t make this again, though I would really like to learn how to make a good chutney - it seems that a very wide variety of ingredients can be used, which opens up a broad range of possibilities.