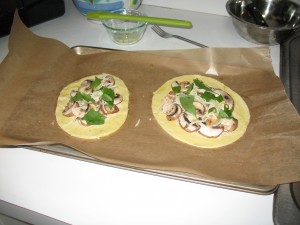 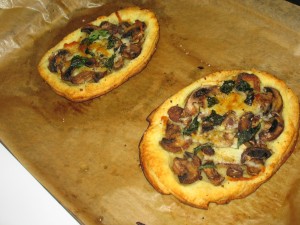 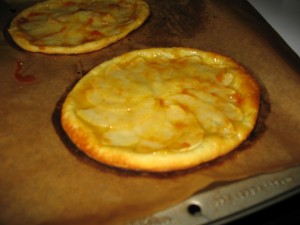 Inspired by this episode of Good Eats, I decided to experiment with puff pastry. Puff pastry’s pretty neat. The basic process for making is that you take dough and cover it with a ton of butter. You then fold the dough over so it’s like a butter sandwich.

If you keep folding it over itself, you eventually end with thousands of layers of dough and butter. When you bake it, the water in the butter boils off, causing it to… well, yes. One thing I don’t understand yet is how the layering action helps with this process.

Because it’s essentially impossible to make without industrial equipment, puff pastry is one of the few things I buy readymade these days. It’s in the freezer section. It’s not that expensive, but it allows you to produce some very good-looking and tasty stuff quite easily.

I bought one package of puff pastry and used it to produce 3 sets of tarts - one apple, one pear, and one mushroom, basil and cheese. The apple tart was straight from Good Eats, but the pear and mushroom tarts were my own experiments. Since I don’t like to waste things, I also threw the remaining scraps of dough into the oven as an experiment.

Probably the best result was the mushroom tarts. They turned out like mini-pizzas, with a croissant-like crust. Really good. I brushed the crusts with olive oil to give them a little bit of shine, which sort of worked. Anyway, one day I will actually try making a _bona fide _pizza this way, and I’m surprised I haven’t encountered this yet.

The apple tarts came out pretty well also. Part of what helps is that apples are really easy to work with. You can slice them really thin, which you need to do for this recipe, but they will not get waterlogged when you put them in a water / lemon juice bath (which is what I usually do to prevent browning). I melted some apricot jam and put this over the top as a glaze, which was easy.

I made some pear tarts as well. Problem number one was that the thin pear slices, after being submerged in water for a couple of hours, essentially disintegrated. This didn’t affect the taste very much, which was fine, but it did make them look… rustic. For this tart, I also experiment with an egg wash glaze, but I went a bit overboard and so the resulting tart was a little like a pear omelette. It wasn’t bad by any means, just not exactly what I wanted.

Oh yeah, as I mentioned above I also threw the pastry scraps in the oven to see what would happen. This works fine - you get little biscuit-like things which I’m sure would be delicious with dinner.