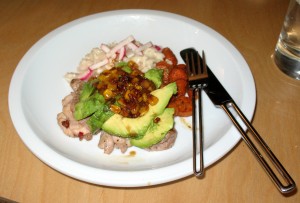 [caption id="attachment_896" align="alignleft" width="300" caption="The dish. You can see the radish risotto (the julienned radishes are just visible) in the back. For some reason, I put the chicken beneath the avocado slices, so you can't see it as well. Next time, I will serve about half as much avocado, or maybe turn it into some kind of salsa."][/caption]

For a single-course dinner a couple weeks ago, I made the following: chicken paillards, carrots roasted with cardamom, and radish risotto. I served all of this with an avocado and some leftover corn salsa.

I had to improvise a little bit. The grocery-store situation in Philadelphia is a little touch-and-go, so I couldn’t get the parsnips - and indeed potatoes - called for in the recipe I linked above! So I decided to just go with the carrots. Similarly, I had some chicken thighs,  but I didn’t feel like roasting them. So I cut them off the bone, flattened them, and seared them quickly (about 3 minutes, maybe a little more, on each side).

As far as the individual components, everything came out really well. The paillards in particular stayed juicy and had a particularly intense chicken flavor. I love radishes, and the risotto recipe allows them to retain a little kick, and a lot of crunchiness. The colors are also beautiful. My only complaint is that the recipe calls for too much cheese, I think.

Evaluating the dinner as a whole, there were many things I liked about it. The flavors were uniformly delicious. They married pretty well together, even though the components aren’t drawn from the same cuisines. I care a lot about color when I cook, and the food was almost a full rainbow - red (radishes), orange (carrots), yellow and green (avocadoes), brown and off-white (chicken and rice).

However, I ran into some presentation issues. As you can see in the picture above, I put the avocadoes on top of the chicken. This actually looked nicer than putting the avocado under the chicken, which I also tried. It certainly isn’t unappetizing, it’s just a little confusing. I think next time I will either serve a bit less avocado, or maybe make it into some kind of salsa as a substitute for the corn salsa. The problem is that (a) the chicken really needs some kind of sauce, but (b) the avocado goes so well with all the other savory components that it seems a shame to leave it out.