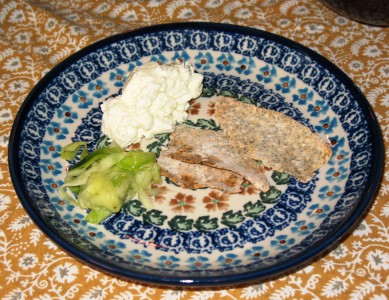 I like to make things from scratch, especially when they involve learning about a new process or technique that I didn’t know about before. I have a great, reliable cracker recipe from Alton Brown, and I was looking for another course for an Italian-ish meal I was making for friends in New York. So, I figured this would be a good opportunity to try making ricotta cheese. 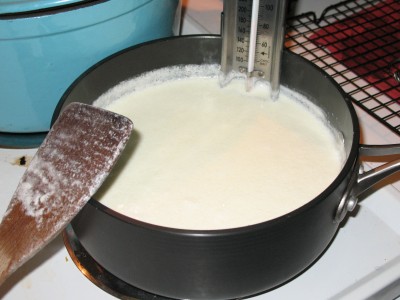 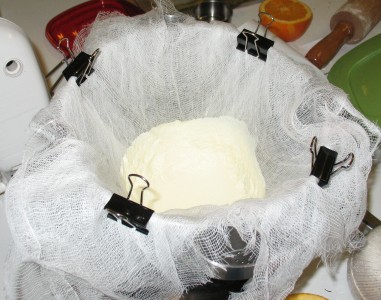 [caption id="attachment_1908" align="alignleft" width="400" caption="Using cheesecloth to catch the curds. This is relatively early in the process, but note the texture of the ricotta. It firms up as it continues to strain."][/caption]

According to the Wikipedia article I’ve linked there, ricotta is not technically a cheese since it’s not formed by coagulating the protein casein (the name of which literally comes from the Latin for cheese, caseus; compare German Kaese, and indeed the English word cheese).

Instead, ricotta is made - traditionally - by coagulating other proteins that are in the milk whey left over after true cheese is made. So, you:

Perhaps this is why ricotta has its name - ricotta means “cooked again” in Italian (though I suppose it’s never really cooked).

However, the homemade ricotta recipe that I used is used is indeed a cheese, since I didn’t make it from whey. Instead, the recipe calls for whole milk to be heated to 190 degrees. I also added lemon juice. Taking these two steps causes the proteins in the milk (all or most of them, I assume, including the casein) to coagulate.

The resulting liquid is then passed through a cheesecloth and allowed to strain for a couple hours. And then you’re done.

This may be one of the best things I’ve made as far as easiness to tastiness ratio. The resulting cheese is easily spreadable and has a mild, sweet taste that went well with the seedy, hard crackers that I make. Using lemon juice as a coagulant also adds a very clear lemon flavor to the resulting cheese, which is refreshing. The recipe suggests serving it alongside zucchini ribbons, which I made by aggressively peeling zucchini and then allowing the resulting ribbons to macerate in salt.