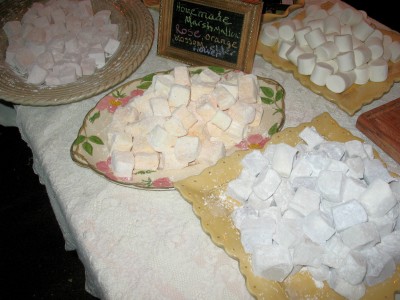 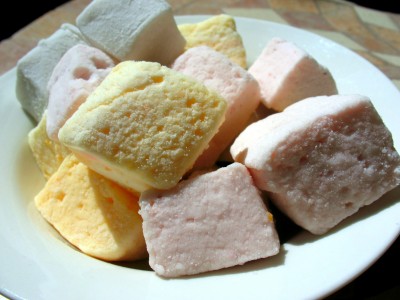 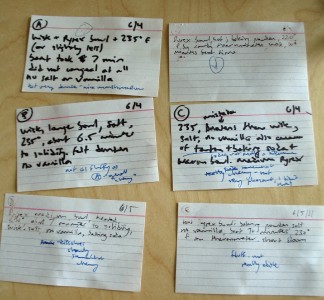 [caption id="attachment_1621" align="alignleft" width="400" caption="Test cards for figuring out what was wrong with my original recipe."][/caption]

At some point I will write a longer post about the work we did for our wedding, which included a lot of DIY stuff. Today I just want to talk about marshmallows.

I knew I wanted to make a bunch more for two reasons. First of all, I wanted to try out this egg white marshmallow recipe. For some reason, I lost my marshmallow mojo (you can call it “marshmojo”) a few months ago and every batch I’ve made since then has come out tasty, but dense; more like a soft candy than a marshmallow. After running a bunch of tests to see what was going wrong, I realized the most effective approach might be to try a different, more reliable recipe altogether.

Secondly, I also wanted to try making some fancier, more… conceptual… marshmallows than I have in the past. I initially thought about the idea of making them dessert-themed (guinness + chocolate topping, banana + caramel topping, something else) but I eventually decided to make them all taste like flowers. This was easier because I had already tested some elderberry-flavored ‘mallows a couple weeks before, so I knew it would probably work out.

I decided on elderberry, as well as rose and orange blossom. Marshmallows like this are not at all hard to make. You just follow the normal recipe, but at some point, you add a little bit of your chosen flavoring agent. In the case of rosewater and orange blossom water, I think I added less than a teaspoon to each batch; I was able to be more aggressive with the St. Germain.

You should add the flavoring to the cold water in which the gelatin blooms; you don’t want it to boil away! Be sure to taste it (before adding gelatin) to make sure you’re getting enough, but not too much, flavor. Keep in mind that you want it to be fairly strong since you’ll be adding a bunch of sugar and water later.

They turned out great, but actually making them involved three separate disasters which vary in importance depending on your point of view.

It’s good to persevere, though. After wasting a lot of ingredients, I finally ended up with three very large batches of marshmallows that looked and tasted great. I can pretty much guarantee that none of my guests had tasted marshmallows in these flavors before, and they may never again!

I tinted each batch very subtly so they could be told apart by color - orange blossom were orange, rose a light pink, and elderflower purple. We served them along with some wonderful floral cocktails and some normal marshmallows and s’more fixins (egg white marshmallows liquefy if you try to roast them).