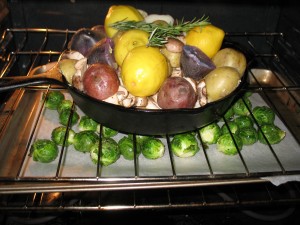 [caption id="attachment_946" align="alignleft" width="300" caption="Lemon chicken in the top of the oven, and sprouts roasting below. "][/caption] 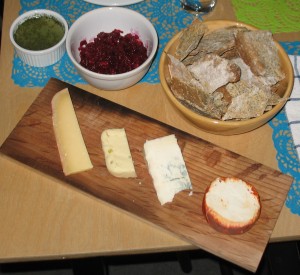 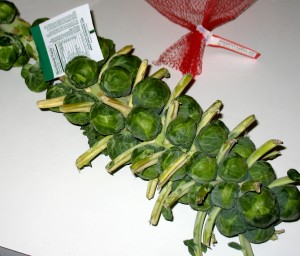 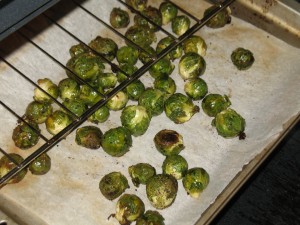 I recently had a couple of friends over for a Sunday night dinner. Being somewhat short on time, I had to make dishes that led to good results in a time-efficient way.

So I chose (a) a cheese plate with some cucumber jelly and beet jam, (b) rosemary-lemon chicken, and © tres leches cake, which I served with a raspberry sauce and maple-glazed almonds.

Everything came out really well. For the cheese plate, I tried to focus on picking a variety of cheeses that would go well with the accompaniments. In this case, I was serving another dinner the next day, so I’ll write about the cheese plate in more detail when I write about that dinner. The beet jam and cucumber jelly I’ve made before, as well as the crackers, though for different purposes.

The chicken was pretty easy to make, and searing and then putting in the oven ensures that it gets nice and crispy on the outside without too much risk of overdone-ness. I’m not sure that baking it with the lemons and rosemary on top actually does anything for the flavor, though it was speculated that the rosemary and lemon might release some of their essential oils into the sauce. Not convinced.

I realize now that I’ve never written an entry about tres leches cake before, though it’s a recipe I make relatively often since it’s straightforward, and a crowdpleaser. Next time I make it, I promise a proper entry on the topic. In the meantime, if you haven’t had it, it’s basically a very light sponge cake that is soaked overnight in a mixture of evaporated and condensed milk, served with whipped cream (hence “three milks”). The result is a very satisfying, sweet, and obviously incredibly moist cake. The accompaniments, especially the fruit sauce, work really well with its sweetness.

I served the chicken together with some brussels sprouts, by the way. I had never seen this before, but at Trader Joe’s they were selling them on the stalk! I actually preferred this since the sprouts stay fresher longer, and they’re a lot cheaper this way.  I roasted the sprouts until they were crispy and then served them with a bunch of salt, sort of like healthy french fries.