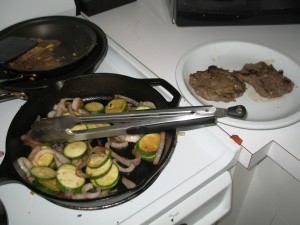 [caption id="attachment_631" align="alignleft" width="300" caption="On the left, the zucchini and onion mixture; on the right the completed skirt steak."][/caption] 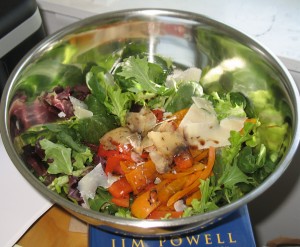 Recently for lunch I made these flank steak sandwiches. They are delicious, but fairly complicated. They have three main sets of ingredients: (1) a roasted pepper and parmesan salad, (2) sauteed zucchini and onions, (3) flank steak. Because these ingredients are layered within a pita pocket, it’s sort of like a little meal with a salad followed by a steak, zucchini and onion entree.

We added some mayonnaise, too, to try to make things even more delicious. As a side, I made this black bean salad, and we brought along some cucumber-cranberry juice. Even though this was a pretty simple meal, I have a number of comments to make.

As I have mentioned before on this blog, I am a big fan of braising, because you can use a cheap piece of meat and make it really delicious. Another way you can make cheap meat delicious is by marinating it for a while.

This recipe calls for flank steak, which is to be marinated in an olive oil, lime juice, and spice mixture. I did this overnight, though I used skirt steak (more on this in a minute). The result, after it is grilled, is delicious, incredibly flavorful, and very tender. This is especially true because flank or skirt steak is usually cut in thin strips, against the grain. This helps make it even more tender by severing a lot of the muscle fibers. The meat isn’t super-cheap, especially not compared to some other cuts such as ribs, but you get way more than you pay for in taste experience.

A word about skirt steak vs. flank steak. This recipe calls for flank steak, which is cut from the abdominal muscles of the cow. I couldn’t find flank steak, so I used skirt steak, which is apparently from the diaphragm (and which is usually used in fajitas). I think this was an OK substitution; I certainly wasn’t able to tell the difference, and they do come from similar areas of the cow and are of similar texture. But some people do notice and care, and I’m sure there are important differences between the 2 cuts that I will eventually become aware of.

As I mentioned above, we put together a quick, spicy mayonnaise to add to the steak. I think this was a great addition, though probably not necessary. We used an immersion blender to bring about the necessary consistency, which has always worked well for me in the past.

However - and perhaps it had something to do with the extreme heat an humidity that day - the mayonnaise completely fell apart as we finished adding the oil. So, it ended up being more of a sauce. Which was fine. Anyway, if you arrive at mayonnaise, stop adding oil!

This meal called for roasted peppers and roasted corn, as well as grilled onions, zucchini, and steak. I only have an electric oven and stove, and no grill, so I had the chance to make some interesting substitutions.

To roast the corn, I spread frozen kernels on parchment paper, and then put this under the broiler in the oven. When the parchment paper caught fire, I had to quickly close the oven door in order to prevent the apartment from filling up with smoke. I lost those kernels in the blaze!

Finally, the recipe calls for the steaks, zucchini and onions to be grilled. I put them all in a very hot cast iron pan as a substitute for the grill. I really enjoy using cast iron pans, mostly because they keep heat well.

However, it is also true that sometimes cast iron pans keep heat better than I would like. I will write more about this later, but until recently I would often get my pan too hot, then add oil, which promptly burned. I would then have to scrub out the oil, and wait a long time for the pan to get cool enough to use.

I ran into this problem immediately when trying to grill the zucchini and onions. Fortunately, I had time to wipe the old oil out and wait for the pan to cool off a bit before trying again.