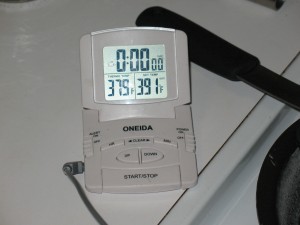 [caption id="attachment_708" align="alignleft" width="300" caption="A thermometer showing oil temperature of 379°. Note that we are past the smoke point of olive oil (375°), which I normally use, but mercifully short of the smoke point of canola oil (at least 464°), which I was using when this picture was taken."][/caption]

Up until recently, the same sequence of events would occur every time I fried in my cast iron pan.

But last time I fried, I realized that this was senseless. Every type of oil has a known “smoke point”, though this can vary a little bit, and reusing oil will also decrease its smoke point by ten degrees or so for each reuse.

At the smoke point, several things consistently happen. According to Wikipedia, the oil breaks down into glycerol (also known as glycerine, which shows up all over the place in food) and free fatty acids. The glycerol breaks down into acrolein. Acrolein is responsible for the distinctive smell of burnt oil (and indeed its name is from Latin acer, meaning “sharp” or “acrid”, plus olere, “to smell”, compare English olfactory).

So how could I avoid exceeding the smoke point?

Once I made these changes, things started to go a lot more smoothly. Ah, measurement. Is there anything you can’t do?