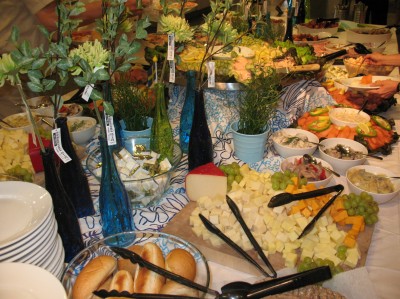 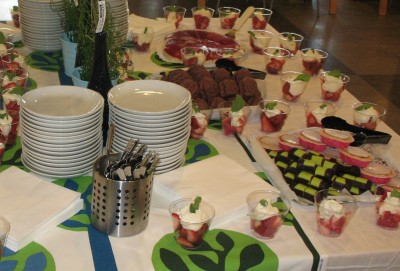 While shopping at IKEA a couple months ago, we saw a sign advertising their upcoming smörgåsbord (a smörgåsbord, in case you don’t know, is basically a giant Swedish buffet). If you’ve ever been to the IKEA restaurant, you know that it’s pretty good for the price, and this offering was about ten bucks for all-you-can-eat delicious Scandinavian food.

I immediately put it in my calendar. We also asked about advance tickets, which I think amused the staff there since this was a couple months before the event. We were, truth be told, probably willing to pick up a couple of KOJA tents and camp out the night before if necessary.

It wasn’t, thankfully. We ended up showing up right before the start of the buffet, and there were plenty of tickets available. The food was totally awesome. Several dishes of salty, savory herring in various hot and sweet sauces. More smoked salmon than I have ever seen before in one place. Deviled eggs with shrimp, which I didn’t realize were a Scandinavian specialty as well.

And of course, sitting at the end of the buffet was an enormous pile of IKEA’s Swedish meatballs with lingonberry jam. These meatballs are pretty typical IKEA - probably not the highest quality in the world, but a really good value, especially if you don’t have expensive taste.

Oh, and after the dinner buffet there was a dessert buffet! This included: enormous mallomars about the size of a tennis ball, some kind of almond cake and another made with lingonberry jam, and, thankfully, some fresh fruit - strawberries. These were surprisingly sweet and juicy, actually, and it was nice to have something non-prepared among all the Scandinavian specialties.

One question that kept coming up for me is why IKEA does this, from a business perspective.

My main theory is that it’s a marketing event. In theory, the smörgåsbord is a fairly powerful way to remind customers (and employees) of IKEA’s Scandinavian heritage and brand values - economical, good quality, fair pricing, clean and creative. These values were expressed in the food that was served and even in the concept of a buffet, which is basically the most DIY, high-value, low-pretension way of serving a large group of people.

The problem with this theory is that there were relatively few attendees, and the event is only held once a year. If this is truly a marketing decision, why would you not do this more often? Is it such a money-losing proposition that this doesn’t make sense to do frequently?

Another theory that I had - one far more cynical - is that this is a way of unloading spare merchandise. Almost all the food we were served was likely sold in IKEA’s food section, and Scandinavian food by its very nature tends to be long-lived. Given how far in advance IKEA advertised the event, I’m not sure this is true. Also, this doesn’t really solve the problem of why IKEA only has this event once a year, which is what really perplexes me.