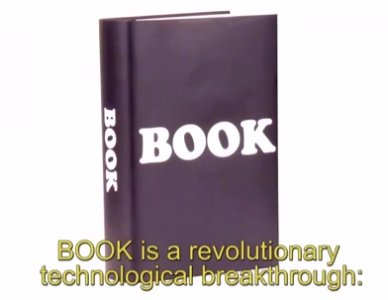 I go back and forth on buying physical vs. electronic books. Recently, I read the Lord of the Rings trilogy on my Kindle, but then just a few days after finishing I bought about half a dozen physical books for my next reads. Physical books have these advantages which I just haven’t been able to get in digital:

It occurred to me while I was buying these books that at one point, books were a big-deal new technology. Actually, the modern book is the result of combining many, many different big-deal new technologies, including writing, typesetting, printing, binding, paper production, etc. It’s easy to forget this.

I then realized that there are lots of other different big-deal technologies that we don’t think about. Like the bike I just bought, which also has lots of advantages over more recently-invented forms of transportation:

And the modern bike, too, is a combination of lots of other big-deal technologies - metalworking / woodworking, rubber molding, and classical physics, for example.

Because they’re combinations of lots of different development over time, books and bikes have the nice ability to degrade gracefully in the absence of these technologies. A book can exist without a binding or a cover, or without typesetting or mechnical printing. A bike can have a wooden frame, or even a cardboard frame or a 3D printed frame.

These technologies are well-understood and easy to reason about, and so they’re easily extensible; you can add a book-light to a book or substitute a different type of paper or produce different types of books for different applications. Anybody can make these extensions, specialist knowledge isn’t always required. This “old new” technology is also intrinsically much more maker-friendly.

And there’s still huge money to be made in continuing to extend these technologies, which is maybe what we’re actually seeing with the electronic book (an extension rather than a replacement), and what we’re seeing much more obviously with new devices that are coming out to make bikes easier and more fun to ride, and even more practical.