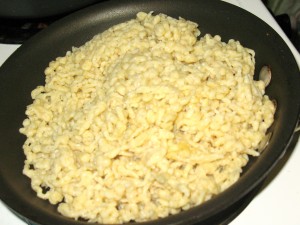 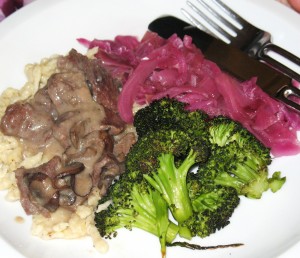 Yesterday I made a dish of red cabbage with onions and apples, roasted broccoli, and beef stroganoff over spaetzle.

The main motivation for this dish was to make spaetzle ( “shpehtzul”), which is a wonderful German pasta that is apparently often cooked with lots of butter to produce an Easy-Mac-like dish. I am applying for the “Easy Spaetzle” and “Spaetzle Mac” trademarks as you read this.

The process for making spaetzle was pretty difficult when I was doing it, but in retrospect isn’t that hard. The dough recipe I linked above results in an extremely viscous dough that’s really more like a batter. If you press the batter through a slotted spoon or other implement with small holes, into boiling water, you’re basically making pasta. What I didn’t understand at the time was that the dough is supposed to be batter-like. I ended up adding a bunch of flour to tighten it up, which made it almost impossible to extrude.

Anyway, this ended up coming out well after a lot of frustration. The red cabbage and stroganoff are natural companions. Both are sort of braised dishes, but only need a couple of hours, or less, of braising. Making the cabbage also gave me a chance to put together a small spice bag for the braise - essentially a bouquet garni - which I had never done before.