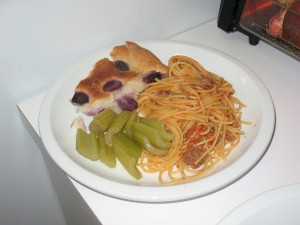 Making spaghetti and meatballs was interesting; I’ve never done this in any form. I didn’t make the spaghetti from scratch this time, just the meatballs and the tomato sauce. I’ll treat each component separately.

Meatballs are pretty easy to make. Here are some comments on the recipe I used:

Anyway, as probably everybody else knows, once the various meatball ingredients are combined together with some eggs, it’s easy to form them, and then you stack them for when you’re ready.

The “best” tomato sauce recipe appears to be a pretty serious bone of contention among certain segments of the population; _de gustibus _etc.. Because I like things that are simple, I decided to use this well-rated “Simplest Tomato Sauce Ever” recipe.

As I said above, I didn’t make the spaghetti myself so there’s not a lot to write about here. I did make sure to pull the spaghetti out of the water early, because it needs to finish cooking in the actual tomato sauce. This allows the flavors to come together better, without overcooking the pasta.

This is where things got a little messy.

Overall, not good. I was able to improvise around many of these problems, but I didn’t think the results reflected the effort I put into the dish. Next time, I will bake the meatballs for longer, and then finish / warm them completely separately, with a little separate bit of sauce. I’ll then add them back to the dish when it’s ready to be served - this will look better, too.

The completed dish tasted fine, but again wasn’t up to my standards. I know enough now, though, that I think my very next attempt at this will be much, much better.

I also note that I sometimes combine dinner components at random. I think this plate has a sort of wacky feel to it (bright green, purple polka dots) which I like.