Near Portland (actually in Beaverton) there’s an awesome Asian supermarket called Uwajimaya. They have tons of Japanese pastries, different types of rice, implements for various types of Asian cooking, fresh fish of all types, and lots of other interesting stuff that I’d love to experiment with one day. Imagine a normal supermarket, but there are also sections with ten different types of things like nori. 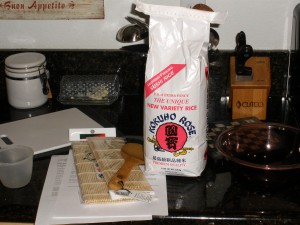 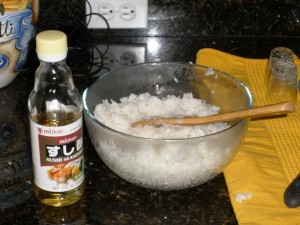 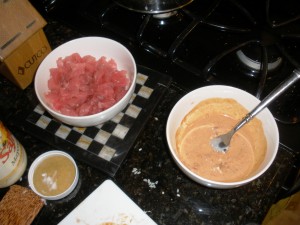 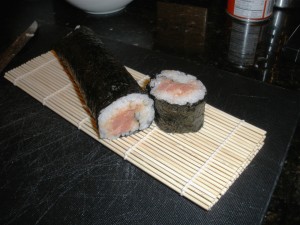 [caption id="attachment_755" align="alignleft" width="300" caption="A completed spicy tuna roll. This one has too much rice!"][/caption] 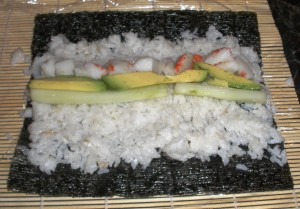 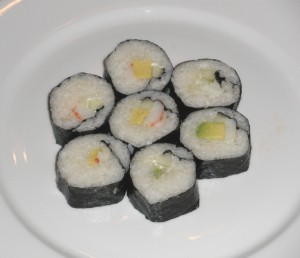 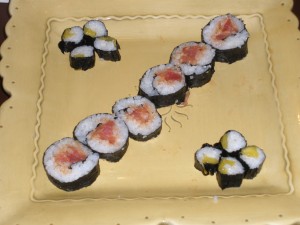 I stopped by there and bought all the basics:

The first step is simply to make the rice. This is fairly easy. Some rice wine vinegar and other seasoning is added as it cools, preferably in a wooden bowl that allows moisture to wick away, or at least in a non-metal bowl. (Metal bowls can react with the vinegar.)

Next, the roll is assembled. For a typical roll, a sheet of nori (commonly known as seaweed, actually algae) is placed on the bamboo mat, and covered with rice. The filling is put on top, and then the whole thing is rolled up.

I tried to squeeze the roll together as I rolled, if this makes sense. For example, if you have ever watched a burrito being made, you’ll notice the person rolling pull the stuffing toward them, and squeeze the burrito shut, as they roll. Same thing with an empanada - I learned to use a fork to keep the stuffing in place as I closed the pocket.

In general, doing this with stuffed foods keeps everything nice and tightly packed together, which is important for (a) structural integrity and (b) appearance. I have yet to develop any real skill in doing this, but I think I do understand the general principles now.

We made (a) California, (b) shrimp and avocado, © spicy tuna (with a special barbecue spice made of pureed chipotle peppers), and (d) mango rolls, with varying levels of success. I also made about half the rolls with coconut risotto substituting for the plain sushi rice. In many cases, this was quite delicious. It was a lot easier to build rolls with risotto, too, since it forms a solid, contiguous mass more easily. Having too much of it doesn’also t leave the roll flavorless. This is a promising approach that I look forward to using in the future.

Making a very thin layer of rice, and being conservative with the amount of filling, seem to be the keys to a tasty and well-built roll.  The ingredients speak for themselves, so once you have selected and combined them, the quality of the roll construction is all you have control over.

I suppose you could say that about any cooking whatsoever. Once you have selected and combined the ingredients, all you have control over is the “construction” of the dish. But I guess what I mean is that there are many fewer variables in making a roll as opposed to, say, braising lamb, where you would have to consider e.g. cooking time, temperature, further seasoning, presentation, coordinating the completion of the dish with the completion of sides… perhaps this gaijin just doesn’t understand the subtleties!