[caption id="attachment_1087" align="alignleft" width="399" caption="This is not exactly what a terrine is supposed to look like. Tasty, though!"][/caption] 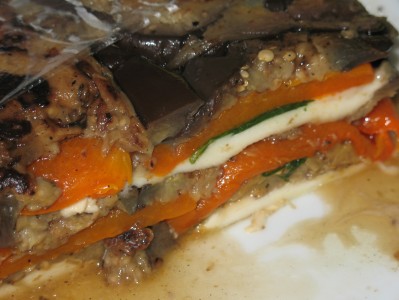 So, technically a terrine is a layering of ground meat, made into a paste, sometimes with aspic and other components as well (e.g. herbs). But as far as I can tell, the word has come to mean almost any dish that comprises layers of ingredients and is then pressed together within a loaf pan or similar type of pan.

For this terrine, I used roasted peppers and grilled eggplant, as well as mozzarella. The roasted peppers are set under the broiler for ten minutes or so, and rotated occasionally so that the skin chars. They’re put in a paper bag to cool - the paper bag keeps the steam from the peppers from floating away, which loosens the skin and makes the peppers much easier to peel. The result is a soft, slightly smoky, pepper that can easily be sliced and eaten by itself.

For the eggplant, I didn’t have a grill, so I simply sauteed them in a cast-iron pan until they cooked through. Though I tried drizzling oil directly on the eggplant slices, the oil is immediately soaked up which means (a) the slices aren’t evenly oiled, and (b) parts of the eggplant start becoming soggy. Instead, it’s better to brush the oil on.

Putting the terrine in a loaf pan and letting it sit overnight so that it comes together is important as well. Mine fell apart as soon as I started slicing it, so I had to improvise on the presentation. I put the terrine over some tomato sauce, and then surrounded it with some fresh peas (which are surprisingly hard to find!) and mint. The mint and the parsley in the terrine both had a refreshing sweetness that tied the presentation together well.