I heard about the maple bacon latte served at the Pirate Cat Cafe in San Francisco about a year ago, from Anthony Bourdain’s show. Since then, I’ve wanted to try it, and have tried to stop by the Pirate Cat every trip I’ve made to SF… with success only recently. 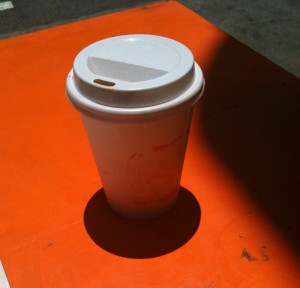 The maple bacon latte is a normal coffee latte, with bacon fat and maple syrup added. If you have tremendous respect for the culinary powers of bacon, and an adventurous palate, you may be saying that sounds really good. That wasn’t totally my expectation, but I did think it would likely be an interesting experience. Bacon usually adds a certain savoriness to anything it touches, and the maple syrup would be a nice, sweet addition.

After putting down my $5, I took a sip. I didn’t really like it. The first problem was that the heat of the coffee made it very difficult to taste anything else. Also, the bitterness of the coffee was accentuated - in an unpleasant way - by the ashy crispness of the bacon. For some reason they added bacon bits on top of the latte as well; this added a chunky texture which was unpleasant, too.

I did like the addition of maple syrup, however. And I wonder whether bacon fat might work well in a coffee milkshake, where it would be able to add smoothness and cut the sweetness of the drink? I do know that maple syrup and bacon go well together.