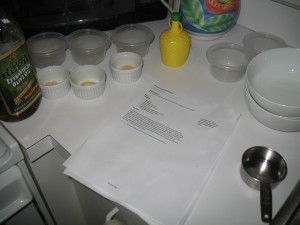 I’ve never made mayonnaise before - it’s actually pretty simple, just lemon juice and vinegar, combined with some kind of oil, and an egg yolk that acts as an emulsifier to bind the oil and water together. I read in Herve This’ Molecular Gastronomy that you can build several variations on mayonnaise, including one with only a drop of yolk (since you actually only need a very small amount of yolk to bind all the oil and water together) and another with _egg whites _instead of egg yolk (since the egg white molecules can also emulsify, I guess?)

Anyway, I set up an experiment station and hope this is the first of many. I put out 3 identical sets of mises-en-place. You’re really supposed to use a flavorless oil like canola, though I decided to use a mixture of half olive and half canola oil. This still gave it a very strong flavor, which I liked, but which isn’t standard - according to the Wikipedia article on mayonnaise, it’s made this way in Spain.

Using an entire egg yolk worked, of course. I’ve always hated mayonnaise and I was surprised how appetizing it seems now that I’ve actually made it. It takes a fair amount of whipping in order to get everything together, but as you do it comes together into this sort of magical new substance, similar to what happens when you whip cream, and I guess the same process.

The single drop of egg yolk didn’t work - not sure if I didn’t do enough whipping, but the mayonnaise never came together. The egg whites worked also, giving a mayonnaise of a pretty different texture. It wasn’t unappetizing, but it was sort of batter-like.