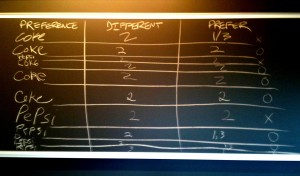 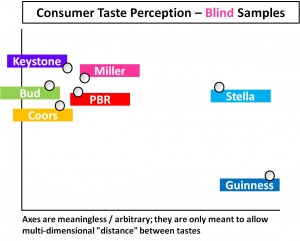 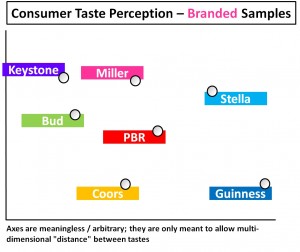 Remember the Pepsi Challenge? (Well, perhaps they still do it, but do you remember it?)

The deal was that people would take a blind taste test of Pepsi and Coke, and say which one they preferred. The reason this is called the Pepsi Challenge (and not the Coke Challenge) is that Pepsi promoted the results – because they often won.

The Challenge raises several interesting problems. First is whether this is a fair test. Pepsi has the advantage of being somewhat sweeter; many people prefer a sweeter flavor if you only take one sip, which is how the Challenge was set up.

Brands in general have a huge impact on taste perception. Check out the branded vs. blind taste test “maps” to the left. This is my approximate recollection of an actual study we were shown in marketing class. People were asked to taste beer samples without knowing what they were, and then intuitively arrange them on a map, which produces a vague grouping by flavor experience. Subjects were then asked to do the same thing with the same beers, but this time they knew what they were tasting. Incredible demonstration of the impact of branding.

Anyway, as part of discussing the dynamics of the soft drink industry, we actually took the Pepsi Challenge in Strategy class a few months ago. Each person stated their preference (Pepsi vs. Coke). Then, with the participants out of the room, three cups were filled, two with Pepsi and one with Coke. Participants listed which cup was the odd one out, and which they preferred (cup 2, or cups 1 and 3).

As you can see from Xs and Os in the far-right column, most people got this right. Pepsi and Coke are actually pretty different, though some people don’t seem to think so. About a third actually got this wrong, of which 2 thought they preferred Pepsi when they really preferred Coke (and vice-versa for the remaining person).

One thing that’s illuminating about this experiment is that it shows you how the soft drink industry remains profitable. Coke and Pepsi only go up against each other in the Pepsi challenge – there’s no RC Cola, and no other colas either. They compete, but only against each other, with the result that they have a cozy duopoly in the industry which maximizes profits for both of them over the long term. If you follow the pattern of new product introductions, you also notice that Pepsi and Coke tend to introduce similar products very close in time to one another.