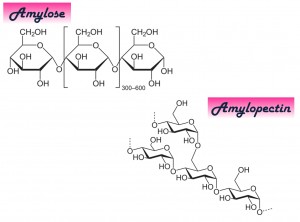 A few years ago, I heard Alton Brown make a comment that has stuck in my head ever since. “A starch high in amylopectin,” he said, “will not create a gel that is quite as thick as amylose, but it will tolerate temperatures well below freezing. So, for my frozen pie filling, I will go with amylopectin-packed tapioca flour.”

First of all, let me say that I am aware that this is not the type of comment that sticks in normal people’s heads.

But having said that, this was so surprising to me because I had no idea flour could do this for you. And yet here Alton Brown was, casually using an obscure flour for an obscure, but probably good, reason. I have no idea whether this substitution is actually effective. But it made me wonder, can I one day improve my recipes by thinking creatively about flour? As a first step, I’ve written this entry.

First of all, what is flour?

There are lots of other things to talk about also, but those seem to be the main relevant components. So what are the differences between different types of flour?