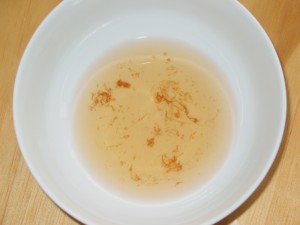 Recently I used apple cider vinegar to create a brine that I could soak some carrots in (more on that later). When I picked up the bottle, I noticed some weird floating strands in it. Vinegar manufacturers must get this question a lot, because my thought at the time, “what are these floating strands in my vinegar?”, was printed verbatim on the side of the bottle. These, the bottle went on to explain, are called “mother of vinegar”. I will now repeat the bottle’s vague explanation, together with some additional information.

That’s the basic process, though here is a more detailed set of instructions.

As these bacteria create acetic acid, they also create cellulose. The wispy “mother of vinegar” strands are just cellulose and bacteria. They can be left in, or filtered out, with no ill effects. Here, by the way, is the Wikipedia article on mother of vinegar, and here is the Vinegar Institute’s Vinegar FAQ; both of these were helpful in learning how this works.

“Egar” comes from an old French word, “aigre”, meaning “sour”, and which shows up in English as “eager”. “Aigre” is ultimately derived from Latin “acer”, meaning “sharp” (“acerbic”, “acrimonious”). So vinegar is literally “sour wine”.