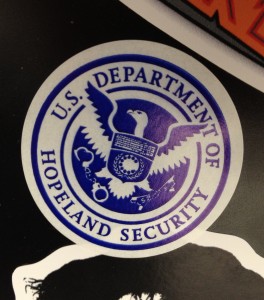 A couple weeks ago, I volunteered at the HOPE (Hackers on Planet Earth) conference for the first time. It was my first time attending, too, and it was really nice to be around new, unfamiliar ideas again.

I helped run the info desk. “Information” is a loaded word at a conference like HOPE, because it’s a huge theme of the conference – protecting it, scrutinizing it, dispersing it, changing it, hacking it, etc. Also, at a conference like HOPE most attendees are self-starters and are therefore good at generating their own information; many times none of the volunteers at the desk could answer a question, but the asker ended up finding out the answer on their own and telling us.

HOPE this year was passport- and travel-themed, with Department of HOPEland security t-shirts present everywhere, passports with Anonymous’ face being issued as registration passes, etc. This was clearly both an exploration of the ideas behind security and access, as well as a satire of what “security” often entails (at best, inconvenience and at worst, repression). Signs warned that reading them was potentially a criminal offense, and that every attendee was being actively monitored and could be easily found, both of which are true in a sort of clever, exploratory sense and both of which you could imagine might actually be true in a more disturbing sense.

Part of our job, in keeping this theme, was to hand out “visas” to the most popular talks, the keynotes. The “visas” were originally intended to limit access to the keynote speeches from the conference, since the keynote rooms did not have enough capacity for all attendees. However, they were found not to work for crowd control, so they were abandoned as a means of doing this.

Something really interesting happened, though: people were still really wanted them. This interest persisted even when we put up a sign that said that “visas are meaningless, even though they are cool”. In fact, no matter how clearly we explained that these “visas” weren’t needed, people still really wanted them and thought they needed them, though nobody had said they were necessary – and in fact even as people with visas were being turned away from the keynotes for which they were originally intended to guarantee access.

It was an interesting experiment in “rubber-stamping” and the power of authority, even when it’s completely empty and senseless, and I think I would have had the exact same reaction as everyone else who wanted a sticker.