What I learned at my first Open Hardware Summit 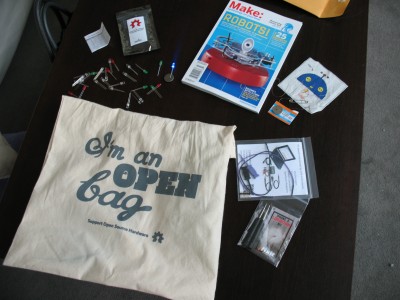 Open Source Hardware](http://en.wikipedia.org/wiki/Open-source_hardware) means technology for which the plans, schematics, and other diagrams - everything you need to know to make your own copy of the hardware - is freely available. The most prominent example to me is the RepRap 3D printer project, and the Makerbot, which is based on it. But there’s also the Arduino microcontroller, OpenPCR, which lets you replicate DNA at home, Lasersaur, which is a laser cutter you can build yourself,  and lots and lots of other projects.

This year was the second gathering of prominent people in the open hardware space, including CEOs of companies that make open hardware, legal experts, academics, and lots of other people. I think open hardware is going to be pretty big in the coming years, especially as it continues to coalesce and overlap with the Maker movement, and so I thought it’d be useful to check out the conference.

(Also, before I continue, a note about the swag bag from the conference. It was fantastic! Electroluminescent thread for sewing, a full set of LEDs and a battery for making throwies, an issue of Make Magazine (beautifully bound and normally quite expensive), as well as tons of other cool stuff.)

The  first set of talks (full schedule is here) was on the open source hardware landscape in general - the big projects, where the community came from and where it’s going, etc.. The guys behind Arduino, the open source microcontroller, gave the keynote.

Now, you have to understand, a year ago I literally knew nothing about hardware and electronics; all my self-teaching efforts over the past few years have been devoted to web development. Since I joined Hive76 in January, I’ve learned a lot, and earlier this week I bought my first Arduino, and finally felt as if I had “arrived” in beginning to understand how to make things.

So it was great to see these guys up on the stage talking about the evolution of their product, which, in addition to being an open source hardware product itself, is also a critical enabler for lots (most?) of other projects that are going on, and a great model for how an open source hardware company can build products that help _educate _people.

Arduino is about to sell their 300,000th chip, which is pretty impressive for a project that started with a 700 Euro investment about six or so years ago. Especially given that the product is open source - their source of income is a 10% royalty on the wholesale price from anyone wishing to distribute Arduinos.

It also was the first instance of a theme that resonated for me throughout the gathering: entrepreneurship doesn’t have to be dramatic. Coming from Wharton, and reading well-known startup blogs, I think it’s easy to get the idea that all companies follow the young person-tech product-VC money-fast growth path.

While that model is important, it discounts almost all of the 600,000(!) new companies that get started every year, from which people make their living. It might be kind of the equivalent of living your life based on People magazine, no? It’s a very narrow view of an incredibly broad field. And even Bre Pettis of Makerbot, whose company recently got $10M of VC funding from some very well-known people, looked pretty relaxed when I saw him at the conference. He is either an absolute master of cool under pressure, or simply doing what he enjoys doing and not freaking out about it.

Anyway, the Arduino guys shared a lot of the lessons from starting their business, and I’m told their slides will eventually be posted on the Open Hardware Summit site. A few of the things they mentioned are that it’s important to know who your customer is, know what you want out of it, and expect resistance. Sort of standard stuff but good to hear again. They were asked about VC funding, and they said something else that echoed throughout the rest of the conference: many open hardware companies don’t need VCs (and they like it that way), or VCs couldn’t be made to understand their business model. Sometimes both.

Eric Wilhelm, the founder of Instructables, spoke shortly after the Arduino guys, and talked about how Instructables grew. Amazingly, when the site was first launched, quite a lot of its content was guns made out of K’Nex (which is a building block system sort of like Legos).

Eric showed a sequence of incredible videos of early Instructables members showcasing increasingly formidable K’Nex weapons. While nobody at the conference thought that could be a business, the level of innovation and evolution was incredibly high, and of course the apex was video of this backpack-mountable K’Nex gatling gun, which you should check out sometime.

The implication? Every open source hardware project has a (metaphorical) backpack-mountable K’Nex gatling gun that it is moving toward, because communities can build around interesting projects and evolution and innovation can happen rapidly.

Bunnie Huang, the founder of Chumby, spoke about Moore’s law in relation to the open source hardware community. I can’t claim to have fully understood everything he was saying, but one interesting idea he had was that of the “heirloom laptop” or “heirloom phone” - technology that you pass down because the version that comes out in 18 months isn’t simply ten times faster and therefore better. What happens to technological artifacts when there is no more real technology obsolescence?

Later in the afternoon we heard some talks on how open hardware was being used for important social goals, and on how communities spring up around open hardware.

The “social change” presentations opened my eyes to the incredible range of open hardware projects that are out there right now; speakers talked about DIY sailboat drones that clean up oil spills, open source geiger counters, and an eye-tracking-based visual writing system that’s allowed a paralyzed graffiti artist to produce salable graffiti art using only his eyes.

These talks show one of the massive advantages of open source hardware, which is that it’s designed for dissemination. In the case of sailboat drones, for example, any environmental organization or interested amateur could build these drones (and even improve them and release the improved design) in the wake of an environmental disaster or in preparation for one. Given how ineffective current methods for oil spill cleaning are, this could be a tremendously useful way of allowing individuals to contribute meaningfully to environmental cleanup. There’s no way to do this with closed-source models.

The geiger counter example is another great one - Shigeru Kobayashi talked about building open source geiger counters in Japan and using that data to map radiation levels across the country in the wake of the nuclear accidents there.

Suddenly, it’s possible to liberate massive amounts of human effort and ingenuity in the service of an important cause. And you don’t have at least one major pitfall of open source software, which is widespread availability of competing closed-source products. Who else is building a really cheap geiger counter? It looks like only open source hardware is filling this niche right now.

Certainly this is the case with one of the other projects that was discussed during this segment, the open source book scanner. What company is producing, or would want to produce, a cheap book scanner for public use? In this case, the open design of the machine (it can be built quickly and cheaply) also directly supports one of the machine’s goals, which is getting as much information as possible digitized and transmissible, as quickly as possible.

Starting Up in Open Hardware

The last major topic area the conference covered was starting up an open hardware business. I like how this seems to be a natural milestone for many open hardware projects, since you need a financial and operational infrastructure to really popularize any piece of open hardware - compare open software, which can be distributed and widely disseminated almost for free.

This set of talks covered mostly practical issues related to getting a hardware business up and running. Bryan Newbold of Octopart talked about some of the immense savings that can be had from mass-ordering certain parts - but also the possible downfalls of trying to immediately commission large runs from places such as Kickstarter, which often take pretty large fees.

Nathan Seidle at Sparkfun (where I bought my new Arduino and other parts from) talked about what parts of his business are open and which aren’t. I have been thinking about this issue myself and I’m sure some open source hardware people are too - his answer was basically that they open up whatever helps their customers build better. Spec sheets for parts? Yes. Supplier names? Not really. Private customer data? Certainly not.

There were a few other talks that I didn’t want to cover in detail, but just mention briefly. Michael Weinberg at Public Knowledge talked about protecting 3D printing (and open hardware) from government intervention.

This is a real, real risk - anyone reading this blog post knows (I hope) that open hardware folks are the good guys. But it is all too easy for lobbyists to get Congress to pass rules squashing the good guys, in the name of protecting the rice bowls of the companies those lobbyists work for. The law is, sadly, a tool for competitive advantage. But Weinberg talked about events he’s organizing to introduce open hardware folks to Congresspeople, so that open hardware has a little more protection when the fight materializes. We’ll see.

Bre Pettis gave a quick talk on the proliferation of designs and “digital mashups” in the 3D printing community, using the many variations on the 3D-printed “gangsta” model (including Yoda + Gangsta = “Yodsta”, and the very meta Gangsta + Gangsta = “sta-sta” as examples).

All I could think of the whole time, as Bre paged through dozens of mashups, was evolution - it was this  massive quantity of different species created through mutation of a common ancestor. Of course, that’s sort of what open hardware is about in some ways, since the DNA (instructions, code, schematics) constantly morphs and evolves, resulting in different phenotypes (completed robots and devices).

What a great way to spend a day, and how impressive, too. I’m excited to think about what next year’s summit will look like! I think the_ most _encouraging thing about the summit might have been that you can both be generous and open with your knowledge, but also build a sustainable business. It’s hard for me to imagine wanting to do one without doing the other.