What is a pomelo? 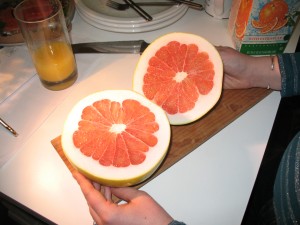 Trader Joe’s sometimes has interesting things on sale - I remember one of the first times I went to a TJ’s, I bought dried rambutan.

A little while ago, they were selling pomelos, which I don’t think I had ever heard of before. Naturally, I bought one. When I was a kid, the only citrus I knew about were lemons, limes, oranges and grapefruit. Later I learned about mandarins, clementines, blood oranges, tangelos, key limes, and more recently yuzu and buddha’s hand. And now these…

On getting the pomelo home, we cut it open. Disappointingly, it had rather a lot of rind and pith; I’ve gotten used to cutting orange sections out, but I’d guess about half the weight of this pomelo was stuff you can’t eat (unless you’re willing to do some work). The juice and sections had a pretty mild, sweet flavor, which was surprising given that other citrus I’ve tried - particularly the grapefruit, to which the pomelo seemed to bear the greatest resemblance - has a sharp taste that in some cases makes the fruit sections inedible (e.g. lemons).

Pomelo’s species name is “Citrus maxima”, i.e. “the biggest citrus”, which is unsurprising and makes me think that at least some plant taxonomists are not very creative. I didn’t know this, but citrus fruits are botanically berries, in particular a specific type called a hesperidium which is not a “true berry” but close.