Why does enterprise software look so bad?

I’ve become a big user of enterprise software in the past couple years. The design of most enterprise software ranges from unattractive to hideous. Color schemes don’t make a lot of sense. There’s no whitespace. Interfaces are busy and unintuitive. There isn’t any sense of fun, either.

I’ve seen a few explanations for this. All of them seem like they’ll go away pretty soon.

“Enterprise vendors have no taste”

But if the vendors have no taste, or at least don’t have the resources to be tasteful, why is that? There are plenty of great designers and UX people out there; why don’t enterprise software vendors hire and listen to them?

Vendors are motivated to create software that sells. So why doesn’t design sell?

Enterprise software has to do a lot

This argument was also advanced in a Hacker News thread. The idea is that because enterprise software is essentially a construction kit, and because it has to work across so many types of businesses and use cases, it’s harder to make it look nice.

This would make sense as argument if it were purely about usability. Building powerful software that also exposes many powerful features in an easily-comprehensible way is indeed difficult. And enterprise software tends to have more features than other types of software.

However, it doesn’t really explain the more design-oriented aspects of this problem, especially when non-adminstrative users are dealing with the software. It also doesn’t explain some of the truly egregious design decisions that are made. Check out the front page of Marketo’s software, for example. It presents almost no functionality, is badly designed, and isn’t customizable. 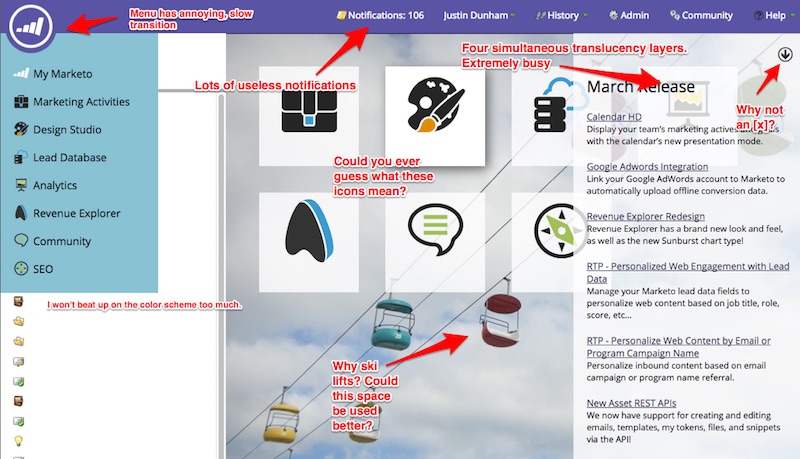 Also, there are lots of enterprise-y software packages that are intended for less sophisticated users, that are still designed reasonably well. Compare Microsoft Office, for example, to SuccessFactors.

The users aren’t the buyers

In enterprise software, there’s a disconnect between people who will use your software, and the people who buy it. That there are some great-looking enterprise software products, like Slack, actually reinforces this idea: those products are almost invariably purchased by the end-user, or are at a relatively low price point. Having an end-user that is also the buyer doesn’t guarantee good design, but it allows for it.

This doesn’t make sense over the long-term

This doesn’t seem like a stable equilibrium, though. There are a bunch of hidden, but very quantifiable, benefits to good design (and good usability):

It seems as if these factors, and others, would eventually influence economic buyers. Users who are getting more out of software, and are more productive with it, mean that the software is more valuable. My guess is that over the long term, enterprise software won’t have the luxury of looking bad anymore.