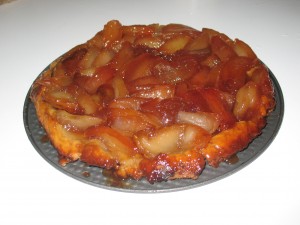 A few days ago, building on my experience with the caramel-pear tart, I decided to bake an apple tarte tatin, which is a very similar concept - apple slices are stewed in a mixture of butter and sugar. The mixture turns into a sweet caramel sauce, which adheres to each apple slice. Meanwhile, the slices themselves break down so that they’re easy to cut. The whole deal is then covered in dough and put in the oven.

As I said, the the tarte is covered in dough as the second-to-last step. But, it is actually being composed upside-down - after you take it out of the oven, you invert it so that the dough ends up on the bottom. This was nerveracking since I had to invert a 400-degree cast iron skillet without proper oven mitts. Yeah, I need to invest in those.

I used an awesome sour cream dough which was really easy to work with, much like the cream cheese dough I used for these empanadas. The recipe I used strangely suggests putting an egg wash on top of the dough, which doesn’t really make sense since it ends up on the bottom of the tarte once it’s done. The dough also has a tendency to melt - you have to work quickly!

Anyway, it turned out pretty well. While at the supermarket, by the way, I noticed they didn’t have the exact type of apple I wanted. I had to look up a substitute. Why? Some apples hold up well to being stewed and baked, and others will turn to mush. It all depends on their various characteristics, which differ from apple to apple.

My god, there are a lot of varieties - according to Wikipedia, 7,500. Each variety expresses certain degrees of important apple characteristics; a certain degree of firmness, or sweetness, shape, or something else.

I am tempted to put together a table of popular cultivars and their characteristics and uses, though Wikipedia has already done this, as have a million other places. Nevertheless, it would be good to have a cheat sheet for the most common American varieties. I would also be interested to know what the actual physical and growing differences are that result in their various characteristics.