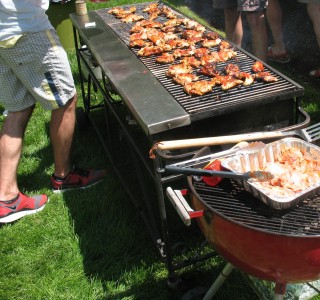 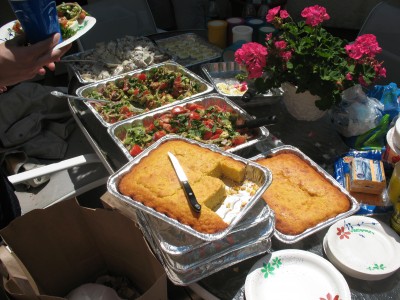 [caption id="attachment_1303" align="alignleft" width="400" caption="Cornbread and (in the background) a couple of different types of salads. I made too much cornbread, but people were happy to take it home with them..."][/caption] 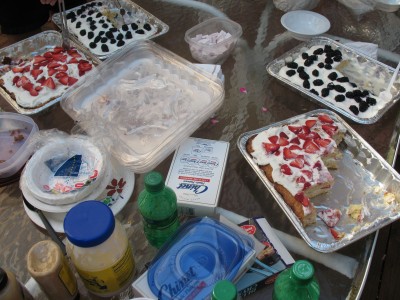 A month or so ago, I wrote about some of the constraints I faced with catering a barbecue for 40 out of my tiny Philadelphia kitchen. (Seriously, I think the kitchen is about 30 square feet, including all counter space, oven, and fridge). In this entry, I’ll talk about my experience in cooking and how everything turned out.

One thing that is surprisingly difficult to do in cooking is _scaling _a recipe. I mean, it’s not too hard for things like salad where you just multiply out the ingredients, or for soup. But when you’re baking things - and that can be cakes, pastries, or lots of savory dishes as well - things often don’t turn out the way you expect. For example, these miniature carrot souffles still take the 11 minutes to bake that a full-sized souffle does. I recently made some beet donuts (more on that later), and same deal, the miniaturization does nothing.

Those are easy examples, because the timing changes but everything else is fine. More heart-rendingly, take note of my experience with cauliflower gratin, which I attempted to make at approximately triple the size (i.e. three portions in a 3x baking dish).

Disaster. The dish is basically cauliflower in a rich cheese sauce. It seemed to bake fine, though it took an abnormally long time. I waited an hour or so for it to cool, and as it cooled… the sauce separated. Instead of a thick, pudding-like sauce, I ended up with a layer of fat on the bottom, and pools of grease on the top, of the dish. The grease then soaked through all of the ingredients, creating an inedible, soggy messy. I had to throw it away! Six cauliflowers’ worth of gratin, gone. I’m not sure exactly what happened, but I guess the lesson is, don’t scale if you don’t have to. It would have been much better to just cook a bunch of normally-sized portions.

The other lesson is to make lots of different things; because I had done this, losing one dish didn’t matter. And actually, my experience with the cornbread I made was the opposite - the vastly scaled-up sheets (the recipe isn’t even for bread, it’s for muffins) were some of the best cornbread I have ever made, with a soft, moist interior and a slightly crunchy top.

Overall, the meal seems to have gone pretty well. The avocado and tomato salad, cornbread, and deviled eggs were devoured. Part of the art, of course, is to pick things that are difficult to screw up, which worked in my favor. People seemed to have an aversion to the potato salad; I couldn’t figure out why. The cakes I made didn’t get finished either (actually only about half of each cake was consumed), but I did hear several people struggle with their inability to put down their fork, despite being stuffed. Overriding your eaters’ free will is every chef’s main goal.