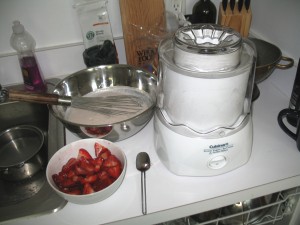 [caption id=“attachment_634” align=“alignleft” width=“300” caption=“Where the ice cream mix is poured in. You can make out the outlines of the drum just underneath the clear lid.”] 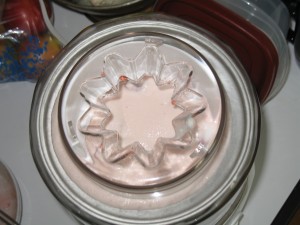 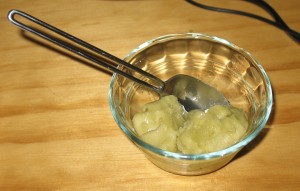 [caption id=“attachment_641” align=“alignleft” width=“225” caption=“Both together. The basil sorbet is on top, garnished with a basil leaf, and below you can see the strawberry ice cream.”] 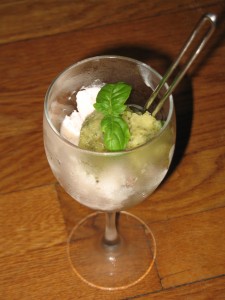 I’ve been thinking of buying an ice cream machine for a long time. Ice cream is one of those things that is easy to make, delicious, and impressive - very appealing. Sorbet is even easier (you can use something as simple as fruit juice as a base), and this machine will do that too.

So when I saw that this very well-reviewed Cuisinart ice cream machine was only $40 on Amazon, it seemed like a good idea to pick it up.

As I mentioned above, ice cream is actually fairly easy to make. I started by making strawberry ice cream, for which the ingredients are milk, cream, some sugar and strawberries - that’s it! The only even remotely difficult step is slicing the strawberries, then leaving them to sit, covered with sugar, for a couple of hours (maceration).

I then made this lime-basil sorbet. As I mentioned above, sorbet is even easier than ice cream; you can just use fruit juice as a base. In this case, I made a simple syrup with lime juice, and then added minced basil leaves.

The result was very tasty, but the recipe calls for the basil leaves to be left in, which results in a strange texture. When I realized this, I simply melted down the sorbet, strained out the leaves, and re-froze. Again, easy, though you would not be able to melt down and re-freeze the ice cream since freezing changes the composition of heavy cream.

How does this ice cream machine work?

Update a week later: AskMetaFilter had this great thread on ice cream ideas and recipes. Some highlights: