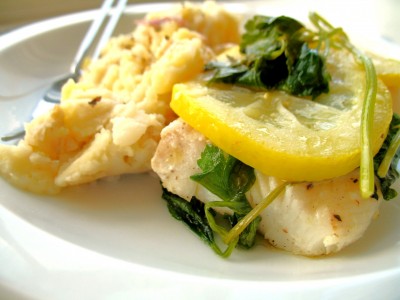 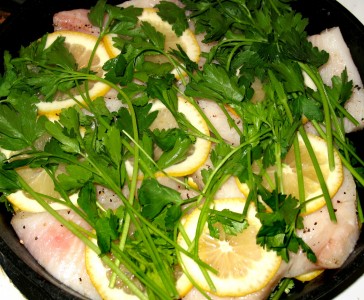 [caption id="attachment_1393" align="alignleft" width="400" caption="Setting up the turbot, parsley and lemon in a cast-iron pan"][/caption] 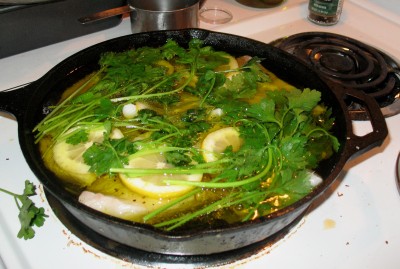 [caption id="attachment_1395" align="alignleft" width="400" caption="The oil poured over the fish, lemon and parsley. Next, it goes in the oven to bake for a few minutes."][/caption]

There’s a technique that’s been on my list for quite a while to try - oil poaching. Poaching generally means just simmering something in a liquid. Poached eggs are one example; eggs are simmered gently in water and a little vinegar until they are cooked through. You can also poach in white wine, or in stock, or in other liquids. The general idea is a gentle, slow cooking, sort of like a fast braise.

So, when I came across this olive-oil poached flounder recipe, it seemed like a good opportunity to try this technique out. (Whole Foods was out of flounder, so I used turbot. The point was to get another fish with a mild taste that would stand up to the hot oil).

Here’s how the recipe works. First of all, note that oil poaching is not to be confused with frying, which would mean cooking food rather quickly in hot oil. Instead, the technique is as follows. You put whatever is to be poached in a pan, ideally an oven-safe one. (I used my cast iron pan, which I’d estimate I use for 90% of my cooking tasks these days).

The oil is then heated in a separate pan, up to about 300 degrees. Obviously, it’s important not to hit the smoke point, since then you’ll burn your oil and have to start again. That would be an expensive mistake given how much oil you’re using! The oil will just sit there as it heats, no bubbling or anything. This is why a good thermometer is important.

You then pour the very, very, very hot oil carefully into your prepared pan, and stick it in an oven heated to about 350. After it cooks for ten minutes, you’re done; pour off the extra oil and serve out of the pan.

If you are like me, this recipe sounds kind of dangerous. You’re going to heat 3 cups of oil to 300 degrees, then try to do things with it? While the oil quietly heats up and starts to shimmer, you’ll envision it spontaneously exploding, getting hot oil all over you and generally wrecking your day. You will ask everyone to else to leave the kitchen, and you’ll don what protective gear you have (a welding helmet and gloves). It was like that scene in Back to the Future when Doc was dropping the plutonium rods into the DeLorean.

Look, I’m not sure how to reassure you other than to say that I did it once and I seem to be OK. Also… totally worth it, because:

I served it with some mashed potatoes with sour cream. This dish gets even better as it ages in your fridge and the flavors meld.