The difference between caramel, butterscotch, and toffee 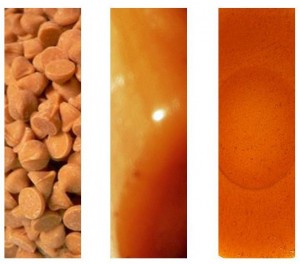 Here are three sugary solids that look similar - butterscotch, toffee, and caramel. It’s not too hard to tell them apart by taste and texture, but what are the actual differences in their manufacture?

All types of sugar candy are made from the same fundamental ingredient, a sugar/water syrup. The syrup is cooked, and as the temperature rises, the water boils off and the moisture content of the syrup decreases. The less water you have in the solution, the harder the resulting candy will generally be. For example, if you want to make hard candy or lollipops, you heat the solution to at least 300 degrees Fahrenheit before letting it cool. If, on the other hand, you want to make fudge, you heat it to only 230 degrees.

Check out the chart below, which is cribbed from Wikipedia (source), for all the details. Some of the stages have names, which describe what happens to the solution if you put a spoonful of it in cold water (the test that was used before candy thermometers were available).


You’ll notice that by 320 degrees Fahrenheit, all the water has boiled away, and what’s left is a pure solution of melted sugar. This is the beginning of caramel (apparently thought to be ultimately from Greek kanna, “sugar”, and melos, “honey”). As the sugar is cooked further, the caramel gets darker and darker until it burns.

So why doesn’t caramel just taste like a bunch of sugar? As the sugar gets heated, a bunch of delicious chemical reactions happen that create all sorts of interesting new molecules, which I’ll leave you to read about here. This also happens as you cook certain other foods as well, which is part of the reason why, for example, sauteeing vegetables can enhance their flavor dramatically.

So that’s caramel. By the way, caramel candy is made by taking the caramel, letting it cool, then mixing it with cream, sugar and vanilla. Or you can cook everything together and let the sugars in the milk caramelize instead of the added sugar, in which case you have a milk caramel.

If you're on this page, I assume you're into great desserts. Check out this dessert cookbook from Brooklyn's Momofuku Milk Bar, featuring lots of really interesting stuff, including the "compost cookie".

Other Types of Candy

Here’s a chart explaining how a few other types of candy are made, as well, to give you a sense of what variations are possible on this process. You’ll notice corn syrup is in a lot of recipes in addition to normal sugar; because of its molecular structure it helps improve shine, smoothness and body.