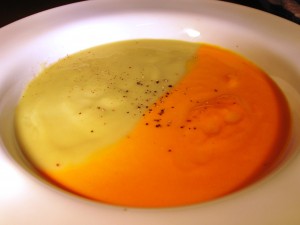 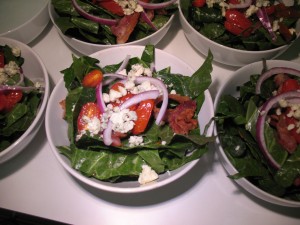 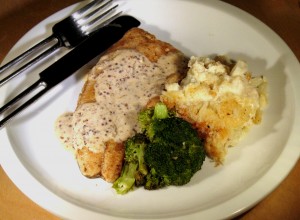 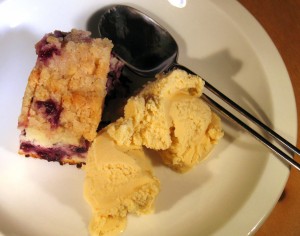 A while ago, I made a four-course dinner with the following courses: a kale salad with bacon, a harlequin soup (half carrot-ginger and half potato-leek), trout meuniere with cauliflower gratin and broccoli, and finally blueberry coffee cake with White Russian ice cream. Whew!

The harlequin soup came out well as usual - the flavors of the carrot-ginger soup and potato-leek soup actually went together pretty well. The salad was interesting - I was supposed to use kale, and only had access to collard greens. Raw collard greens, that’s right. I would probably reconsider making this salad, although one of the things you do to make the greens softer is pour very hot bacon grease over them. It actually went together pretty well, and the bacon is sort of a “reward” for getting through the greens.

The trout and sauce were simple to make and delicious, as was the cauliflower gratin (probably incredibly unhealthy but great). The trout is basically breaded sole meunière (with trout instead of sole), so named because the fish is coated in flour before it is cooked - the meunière is the miller’s wife.

Finally, the White Russian ice cream. I don’t usually use recipes from Rachael Ray, but I was thinking of doing something along these lines and wanted to use something that would definitely work. The White Russian flavor is extremely apparent and delicious, and it goes particularly well in an ice cream format because of the cream that normally goes into a White Russian. It can - and should - be used anywhere vanilla ice cream is!