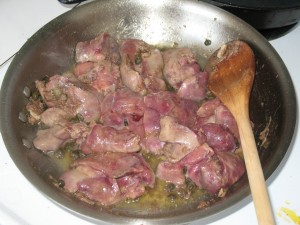 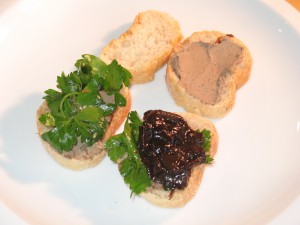 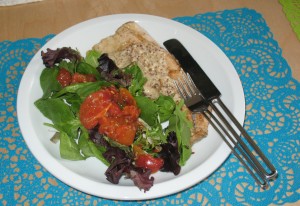 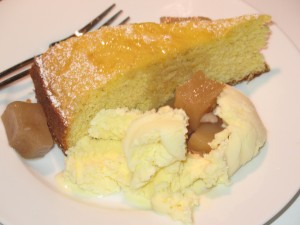 Had some friends over for dinner last weekend. This meal was my return to serious cooking (I took a break for most of January and February), so I wanted to make it interesting. Also, my fiancée was back in Philadelphia for the weekend, and she loves pâté, so I thought that would be a nice surprise. Accordingly, I made the following:

This was a fun meal to make. Pâté is surprisingly easy, and this one just consisted of chicken livers, capers, anchovies, white wine, and a couple of other things, pureed. That’s it.

Another advantage (besides impressing your significant other) is that if you were to buy a pound of chicken liver pate at the store, it would cost you, what, $10 or $20? A pound of chicken livers costs about $3, and then you add maybe $1 or $2 in additional ingredients to make it yourself. And you know exactly what’s in it.

One other thing, too. By making pate yourself, you might learn to like it if you didn’t already. My original experience with pate, as it was with mayonnaise, is that I found it rather… unpleasant to contemplate. But when I saw what actually goes into it - basically just a few incredibly strong and delicious flavors - and how it’s made, I lost my dislike of it. Pate will probably never be my favorite food, but I definitely have more of an appreciation for it now. The combination of the pate, parsley salad and onions sauteed in balsamic vinegar was also… pretty awesome.

As for the carrot-ginger soup, I’ve made it before. But this time, I added an experimental ingredient. If you add some sodium alginate to a relatively neutral liquid (such as carrot juice, apple cider, or certain other things), and then put drops of the resulting combination into a bath of water and calcium chloride, the liquid immediately becomes solid spheres that burst in your mouth when you bite them. This is exactly the same experience as eating caviar. I will write a separate entry about this later, but I (actually we - I invited everyone to help) performed this procedure with some apple cider, resulting in little spheres of cider that burst in your mouth when you bite them. We then put these spheres in our soup… and also tried putting them in our water as well, which was actually sort of interesting.

I’ve written about trout meuniere before, so I won’t say too much more about that here. I served it along with a simple salad of arugula and some tomatoes that were roasted for an hour or so in oil, garlic and onions. Delicious.

Finally, there’s the dessert. I’ve been waiting to make polenta cake again for quite a while, but I didn’t know what to serve it with; the grapefruit mousse I made last time was not repeatable and not amazing. Recently, I came upon a recipe for olive oil ice cream, which seemed like the perfect complement

Let me tell you, this stuff is weird. First of all, the recipe uses raw egg yolks - no cooking as with normal ice cream. Secondly, it is made out of freaking olive oil. But man, it is really delicious. The first time you take a bite, it tastes a little unexpected. But then you want another bite… and another. I served this whole thing with some pears poached in marsala, which were a good accompaniment but which I’m not sure I’ll make again.